We believe data should be presented clearly and comprehensively. The data summarized here includes all known data from all known publications describing:

A Sample of Clinical Literature

Remote magnetic navigation (RMN) and contact force (CF) sensing technologies have been utilized in an effort to improve safety and efficacy of catheter ablation. A comparative analysis of the relative short- and long-term outcomes of AF patients has not been performed. As such, we comparatively evaluated the safety and efficacy of these technologies.

A total of 627 patients who underwent catheter ablation with either a manual irrigated tip catheter: (312, 49.8%) or by RMN: (315, 50.2%) were included in this single-center cohort study. Patients treated with CF (59) were analyzed separately as well. One- and 3-year endpoints included death, HF
hospitalization, stroke, TIA, and atrial flutter or AF recurrence.

RMN results in outcomes similar to manual navigation. The addition of CF sensing catheters did not improve relative procedural outcome or safety profile in comparison to RMN guided ablation in this large observational study of AF ablation. 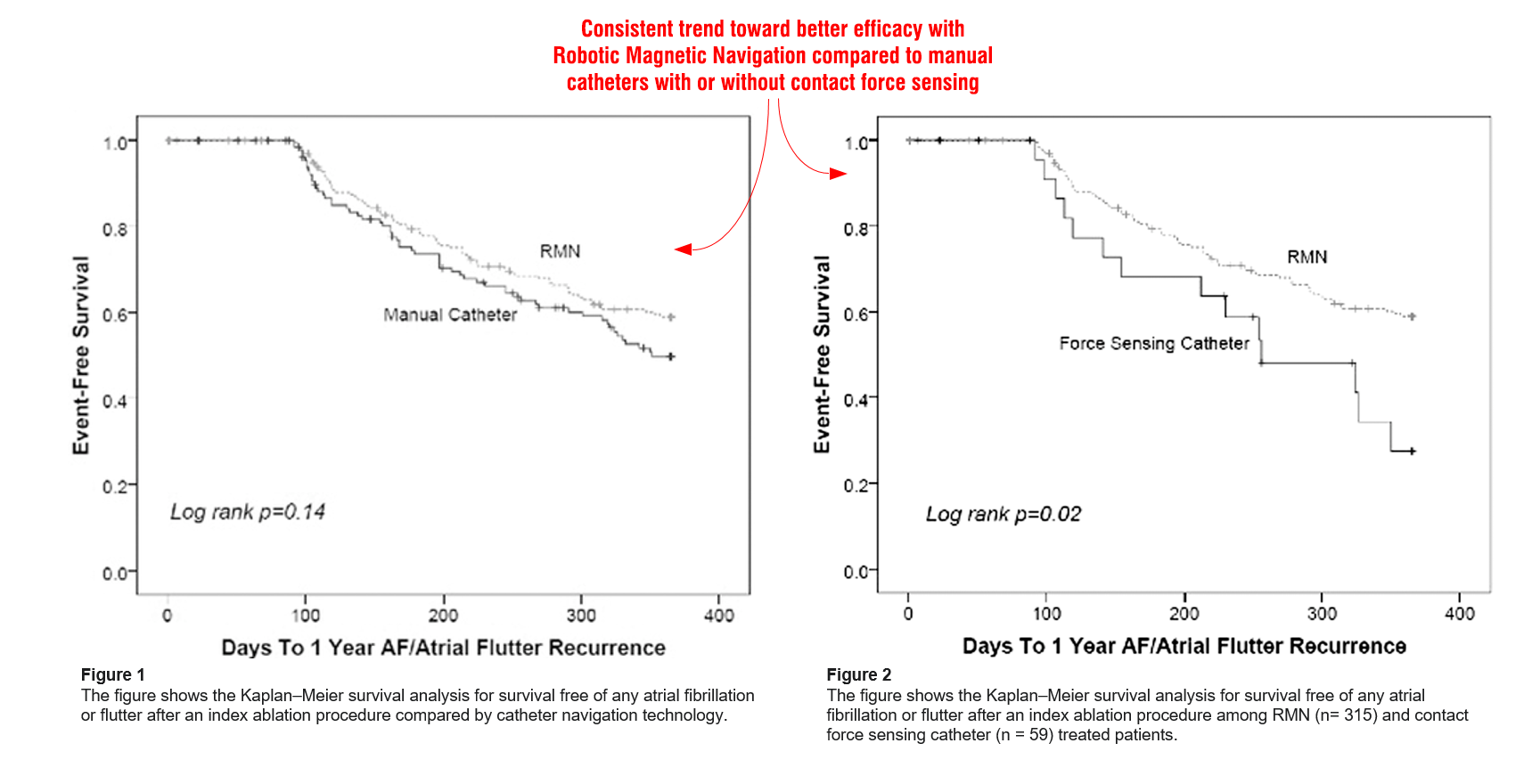 Comparisons between remote magnetic (RMN) and manual catheter navigation for atrial fibrillation (AF) ablation have earlier been reported with controversial results. However, these reports were based on earlier generations of the RMN system.

Differing from previous reports, our data from a larger patient population and longer follow-up time demonstrates that compared to manual technique, the most current RMN technique is associated with better procedural and clinical outcomes for AF ablation. 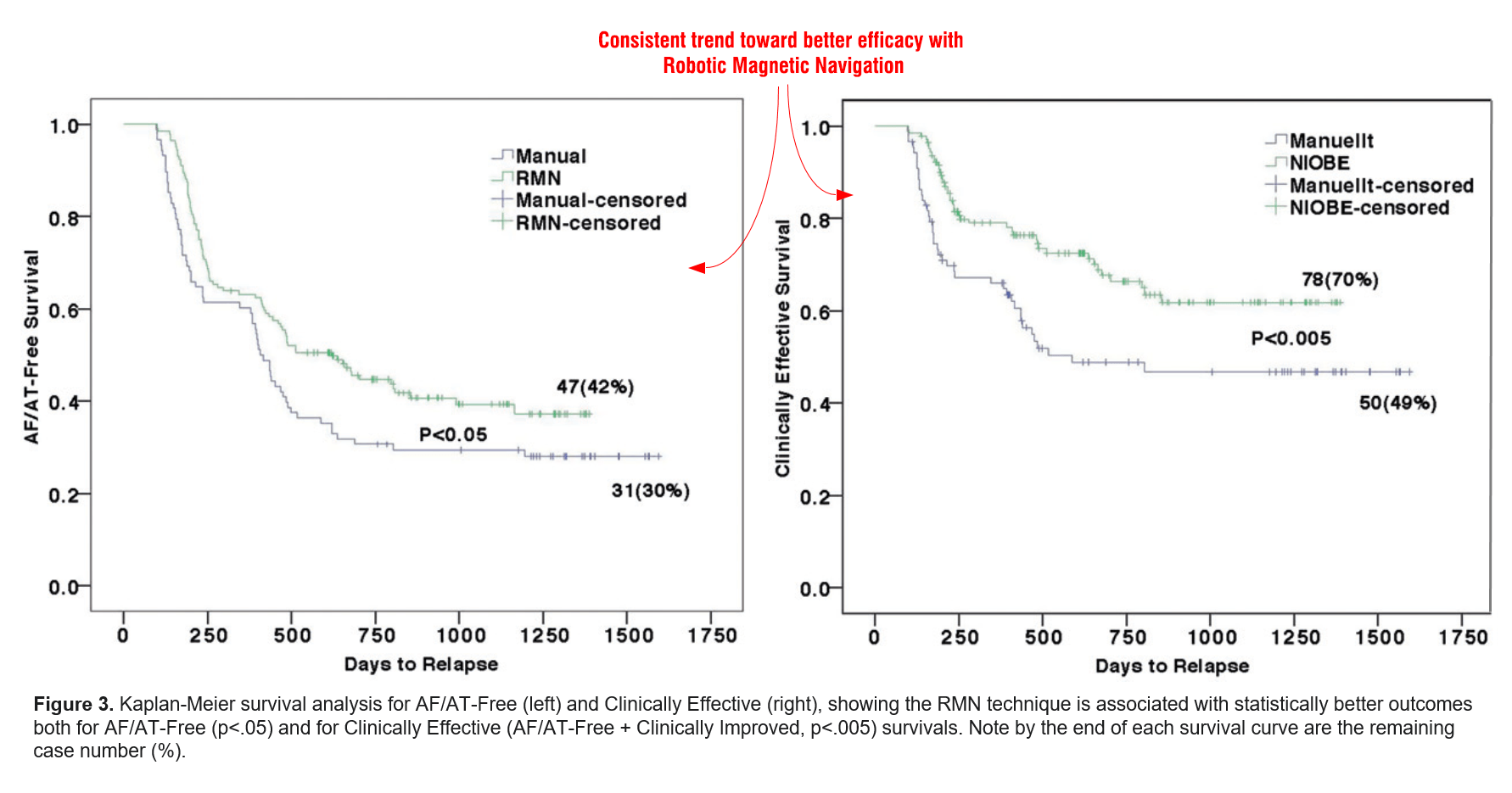 In radiofrequency ablation of atrial fibrillation, RMN appears to significantly reduce fluoroscopy time compared with conventional MAN ablation, though at a cost of increased total procedural time, with comparable acute success rates and safety profile. A reduction in procedure and fluoroscopy times is possible with gaining experience.

INTRODUCTION:
Whether or not the potential advantages of using a magnetic navigation system (MNS) translate into improved outcomes in patients undergoing atrial fibrillation (AF) ablation is a question that remains unanswered.

METHODS AND RESULTS:
In this observational registry study, we used propensity-score matching to compare the outcomes of patients with symptomatic drug-refractory AF who underwent catheter ablation using MNS with the outcomes of those who underwent catheter ablation using conventional manual navigation. Among 1,035 eligible patients, 287 patients in each group had similar propensity scores and were included in the analysis. The primary efficacy outcome was the rate of AF relapse after a 3-month blanking period. At a mean follow-up of 2.6 ± 1.5 years, AF ablation with MNS was associated with a similar risk of AF relapse as compared with manual navigation (18.4% per year and 22.3% per year, respectively; hazard ratio 0.81, 95% CI 0.63-1.05; P = 0.108). Major complications occurred in two patients (0.7%) using MNS, and in six patients (2.1%) undergoing manually navigated ablation (P = 0.286). Fluoroscopy times were 21 ± 10 minutes in the manual navigation group, and 12 ± 9 minutes in the MNS group (P = 0.001), whereas total procedure times were 152 ± 52 minutes and 213 ± 58 minutes, respectively (P = 0.001). 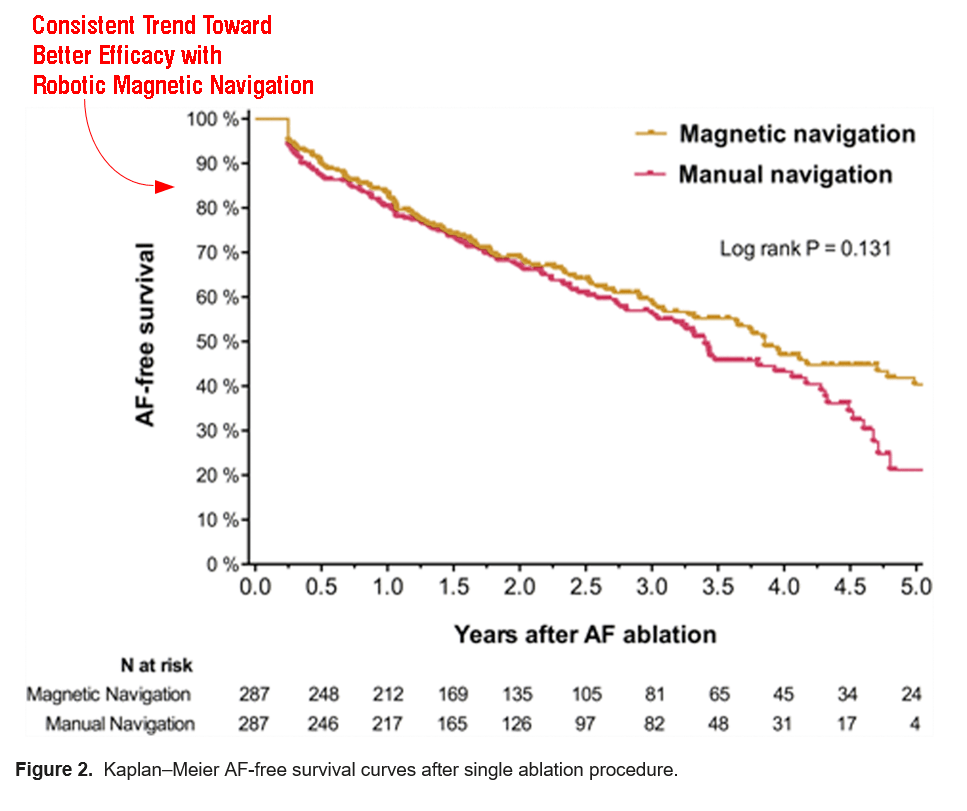 The objective of this study was to assess the procedural outcomes of catheter ablation guided by remote magnetic navigation (RMN) in a large cohort of patients with paroxysmal atrial fibrillation (PAF) and persistent AF (PerAF).

One thousand and six ablation procedures were analyzed. One-third of the patients (240/726) were ablated on more than one occasion, resulting in a mean of 1.3 ± 0.6 times for the entire group. When analyzing all procedures, the mean procedural time and ablation time was 134 ± 35 minutes and 2,130 ± 1,025 seconds, respectively. The mean fluoroscopy time was 5.4 ± 3.7 minutes. Compared to PAF patients, procedural time and ablation time were significantly increased in patients with PerAF by 10% (P < 0.001) and 19% (P < 0.001), respectively. However, fluoroscopy time was not increased (5.3 ± 3.5 minutes, PAF vs. 5.6 ± 4.0 minutes, PerAF, P = 0.17). The overall complication rate was 0.6%. One PAF patient experienced cardiac tamponade. AF repeat ablations by RMN significantly reduced the procedural and ablation times when compared with their first ablation times.

AF ablation guided by RMN is safe as evidenced by a low complication rate. Fluoroscopy time was relatively short for both PAF and PerAF ablation.

We encourage you to view the full publication online.

We aimed to evaluate the safety and long-term efficacy of the magnetic navigation system (MNS) in a large number of patients. The MNS has the potential for improving safety and efficacy based on atraumatic catheter design and superior navigation capabilities.

Our data suggest that the use of MNS improves safety without compromising efficiency of ablations. Magnetic navigation system is more effective than manual ablation for VTs. 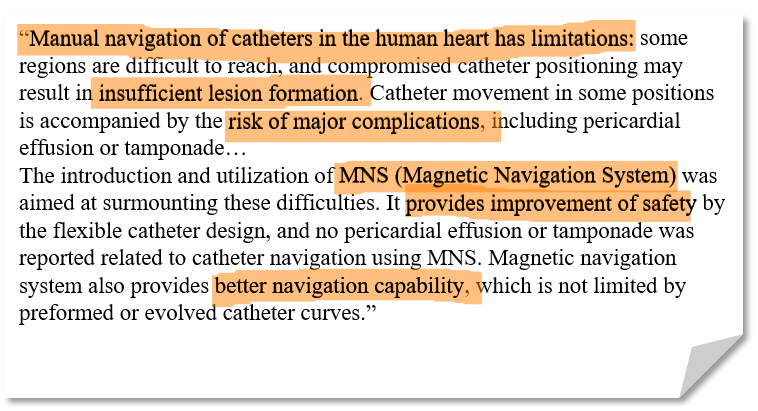 BACKGROUND:
There are limited studies on the safety and efficacy of remote magnetic navigation (RMN) versus manual navigation (MAN) in ventricular tachycardia (VT) ablation.

CONCLUSIONS:
The results demonstrate that RMN is safe and effective when compared with MAN in patients with both SHD and idiopathic VT undergoing catheter ablation. Further prospective studies are needed to further verify the safety and efficacy of RMN.

Catheter ablation for idiopathic ventricular arrhythmia (VA) is effective and safe, but efficacy is frequently limited due to an epicardial origin and difficult anatomy. The remote magnetic navigation (RMN) catheter has a flexible catheter design allowing access to difficult anatomy. We describe the efficacy of the RMN for ablation of idiopathic VA after failed manual ablation.

The RMN is more effective in selected patients with recurrent idiopathic VA after failed manual ablation and is associated with less fluoroscopy time. The RMN catheters have a flexible design enabling them to access otherwise difficult anatomy including the posterior tricuspid annulus and posterior RVOT.

BACKGROUND:
This study aimed to compare acute and late outcomes of VT ablation using the magnetic navigation system (MNS) to manual techniques (MAN) in patients with (SHD) and without (NSHD) structural heart disease.

CONCLUSIONS:
The use of MNS offers advantages for ablation of NSHD-VT, while it offers similar efficacy for SHD-VT. (J Cardiovasc Electrophysiol, Vol. 23, pp. 948-954, September 2012).

In patients with congenital heart disease, challenges to catheter‐based arrhythmia interventions are unique and numerous given the complexity of the underlying defects, anatomic and surgical intervention variants including baffles, conduits, patches, and/or shunts. Remote magnetic navigation offers significant advantages in these cases that may present with limited vascular access or difficult access to the target cardiac chambers implicated by the previous surgical interventions. We reviewed the data available on the safety, feasibility, and effectiveness of magnetic navigation for the treatment of arrhythmia in congenital heart disease and discussed the specific challenges related to various congenital defects and repair with the potential advantages offered by magnetic navigation in these circumstances.

We welcome you to investigate further. Click to view a searchable database of all publications referencing Stereotaxis.

The Genesis RMN® and Niobe® ES Systems are intended to navigate compatible magnetic devices through tissue to designated target sites in the right and left heart, coronary vasculature, neurovasculature, and peripheral vasculature by orienting the device tip in a desired direction. The Cardiodrive® Catheter Advancement System (CAS) is intended to automatically advance and retract  compatible magnetic electrophysiology (EP) mapping and ablation catheters inside a patient’s heart when used in conjunction with a Stereotaxis magnetic navigation system. The Cardiodrive System is not intended to advance the EP mapping and ablation catheters through the coronary vasculature or the coronary sinus.

Consult the associated product labeling for the Indications for Use and instructions of other devices used in conjunction with Stereotaxis products.